Rescue of a Lifetime

September 18, 2014 By MRCC
Home News Releases Rescue of a Lifetime 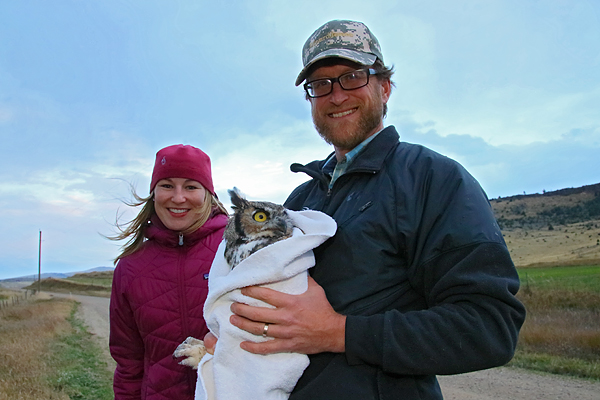 It’s not often we get to see a raptor rescue, recovery, and release first hand. But that’s just what happened to MRCC volunteer and Board member Brian Seneker after his truck collided with a female great horned owl (GHO 140-14) on September 20th.

Brian and his wife, Krista, were headed back to town that evening after floating on the Upper Madison River when the bird flew directly in front of the car, hitting the headlights and bouncing off. “It came out of nowhere. We weren’t even sure what it was at first,” he recalls, noting earlier in the evening they had spotted two other great horned owls on the move as the sun was setting.

The couple stopped to see what had happened and saw a still owl laying in the middle of the road. “We thought we killed it,” Brian recalls. Fortunately he had training working with injured birds of prey. “From working at MRCC, I knew how to handle the owl and we had a towel, so I scooped her up and swaddled her, he explained.” Brian held the owl’s legs above the talons while Krista drove to the Center.

The Senekers were afraid the raptor might not make it. “She couldn’t open her eyes and she barely moved,” Brian recalls. It turns out GHO 140-14 had an eye injury and some “road rash,” but no broken bones. “Once we got to the Center and put her in a cage with some water, the owl totally surprised us and stood up, stretched her wings, and perched on rolled-up towel,” continues Brian. “We started feeling like she might make it. Although, she turned away from us and faced the corner, like she needed to regroup.”

GHO 140-14 was x-rayed and examined by the vet the following morning and found to be in fairly good condition. She was treated with eye drops and supportive therapy until she was strong enough for release. Prior to release, the owl was fed, banded and crated for transport back to the original rescue area for release.

Both Brian and Krista were fortunate enough to release the recovered owl on October 11th “Releasing this bird was a real highlight,” explains Brian. “It was an honor to help with her rehab work—it so rewarding to see her progress, especially considering we feared the worst at the beginning.”

Brian adds that the unique experience brought home how important MRCC’s work is. “Oftentimes as volunteers, we only see birds in the cage and don’t really understand the origin of their injuries. Seeing it happen makes the work we do seem all that more significant. And, watching GHO 140-14 fly away also showed me that raptors are super tough!”