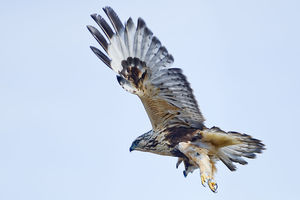 On February 11, the Montana Raptor Conservation Center (MRCC) released a female rough legged hawk that was treated for injuries and rehabilitated. The hawk (RLHA 175-14) was released at the MRCC facility off Springhill Rd, north of Bozeman. Rough legged hawks migrate south from Alaska and Canada to winter in this area. Because they live and breed in the arctic (between latitudes of 61° and 76°), rough leggeds are one of the few hawk species to have feathers to their feet for insulation.

RLHA 175-14 was admitted to MRCC on December 9, 2014 from the Fort Belknap are with injuries consistent with a car collision. “A concerned citizen called it in (406-585-1211) after finding the bird on the side of the road,” recalls Becky Kean, Director of MRCC. “He was then kind enough meet one of our volunteers to hand her off for transport to Billings.” Kean, and MRCC Assistant Director Jordan Spyke picked the hawk up while in Billings for a bald eagle release and completed her journey to the Center.

“Because we treat injured raptors from across the state, we often rely on a network of people traveling in different directions for taxi rides,” says Kean. “It’s a difficult to patch together sometimes, but we are lucky to have so many caring people willing to pitch in.”

Fortunately, RLHA 175-14 reached MRCC quickly. “She had a compound fracture of the right humerous, which can compromise circulation to the wing if not treated quickly,” explains Kean. The following day five pins were surgically implanted to stabilize the break. Seven weeks later, the pins were removed. Additional physical therapy and conditioning in MRCC’s flight barn helped RLHA 175-14 recover to the point where she can now be released.

“She’s a tough gal, and really kind of beat the odds,” observes Kean. “Time is of the essence with the type of injuries she had, so we were happy she got the care she needed right away.” Soon rough legged hawks will begin migrating north, according to Kean. “It’s hard to tell exactly when with the warm weather we’ve been having, but they should be headed back to the tundra sometime in March,” she explains.