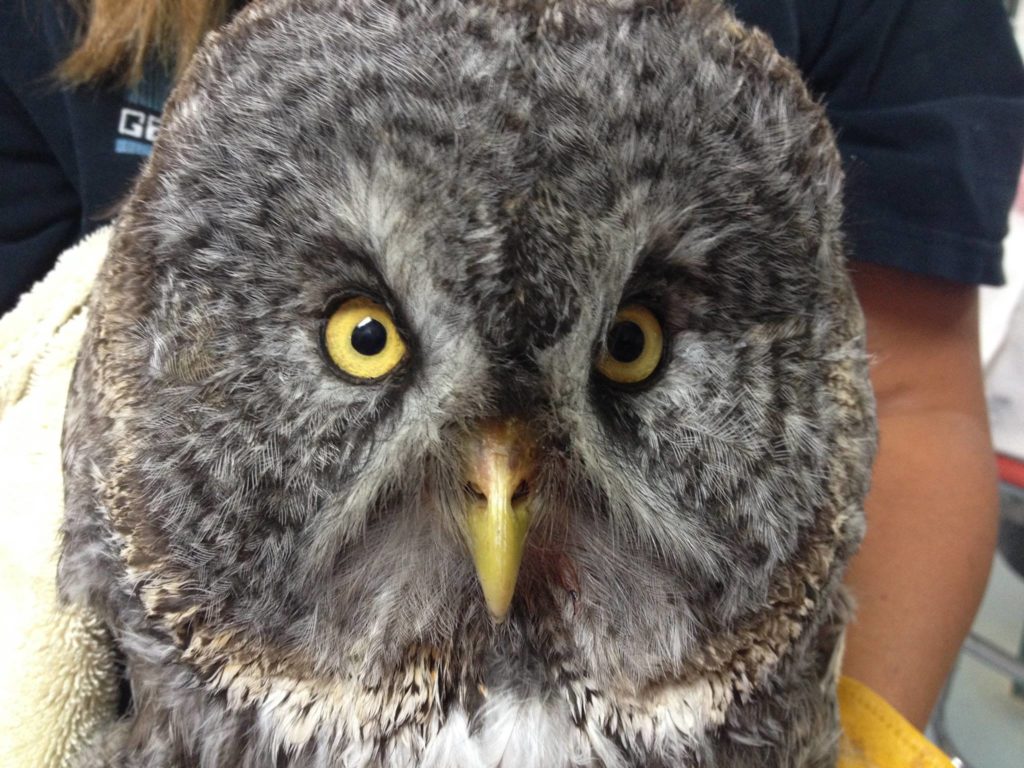 Last fall, MRCC admitted an uncommon raptor under very uncommon circumstances. The raptor was a male Great Gray Owl, a species not frequently seen here. Even more unique, the owl was rescued in Yellowstone National Park and brought to the Center for rehabilitation.

“It was kind of historical,” Director Becky Kean says, “because it was the only Great Gray rescued inside of and released back into the park. Normally, the National Park Service doesn’t rescue injured animals. The policy is to let nature take its course,” Kean points out. Park rangers made an exception in the case of this owl however. Since it had been struck by a car and suffered a human-related injury, they felt it would be appropriate to rescue and get treatment for the owl.

The owl spent two and half months in rehabilitation recovering from a fractured radius. In the meantime, says Kean, the Center volunteers came to respect and admire the magnificent bird. “He was huge, but he would fly down without a sound to get one mouse at time.”

In early January, Kean drove the owl back to the park and released him into the Yellowstone wilderness.

Two days later, the owl was dead. A Park Service employee found his body about 5 miles from the release site near Gardiner. Bands on its legs identified the owl as the one MRCC rehabilitated. A necropsy revealed the owl had a broken pelvis and detached femur. It also revealed heavy metals near the fracture site proving the bird had been shot and died from the wounds.

“It’s very disheartening,” said Kean. “All the time and effort the volunteers put into rehabilitating the owl … It’s so sad that it ended this way.” Shooting and killing him is also illegal, she states, because Great Grays are protected by the Migratory Bird Treaty Act. (See “Did You Know” for more on the Act.)

The incident was reported to the local game warden. Despite ongoing federal and state investigations, Kean doubts that the perpetrator will be found or fined. If anyone has information regarding the case however, she urges them to call 1-800-tip-mont, noting that callers can remain anonymous.