Great Grey Owl Flies Back into the Wild 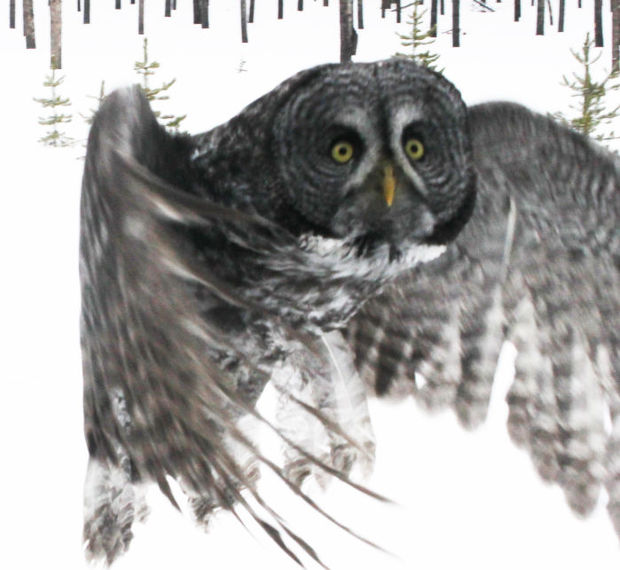 The Montana Raptor Conservation Center (MRCC) released a male Great Grey Owl that was treated for injuries and rehabilitated. The male owl (GGOW 170-14) was released near Georgetown Lake, where he was rescued. Great Grey Owls are relatively rare with only five admitted to MRCC in the last five years—only one-half of one percent of raptors treated in that time period. They are the tallest owl species in North America with a wingspan of 53-60 inches. Inhabitants of the boreal forest, they live in the heavily wooded areas common to western Montana.

An examination and x-rays revealed a fractured left shoulder, which was set and wrapped for approximately five weeks in order to allow the bones to heal. “Setting this particular fracture was tricky because if the bones weren’t lined up just right, the wing location would be off,” explains says Jordan Spyke, Assistant Director at MRCC. “We periodically unwrapped the wing to perform stretching exercises and re-x-rayed the fracture to make sure it was properly aligned and calcifying,” he adds.

After a few weeks of physical therapy and rehabilitation in MRCC’s flight enclosure, the owl is ready to return to the wild. “It’s courting season for owls,” explains Kean, “We want this guy to get back into his established territory so he can begin the process of pairing up. Owls do a great deal of hooting as part of their courtship,” she adds, “so now is great time to listen for them.”

“Even though MRCC’s facilities are in the Bozeman area, we try to release recovered raptors in their home range,” says MRCC Board President Rick Sanders. “Our staff cover a lot of miles—15,000 in 2014 alone—to rescue and release raptors across the entire state of Montana,” he adds. “MRCC also works with a network of dedicated volunteers to capture and transport injured birds of prey for treatment. We are grateful for their service and encourage every community member to report injured raptors by calling 406-585-1211.”